The American Presidential campaign is in fourth gear.

The "labels" abound; "liberal", "conservative", "neo-conservative" and The term, at its root, implies progress toward something better. Like most terms used in an effort to divide groups and set them against each other, these political terms have made their way into our common discourse. They have also crossed into the parlance of theological conviction. Let me give an example. It was based upon a premise that is being repeated in many places these days. In an age where the mere repetition of a mistaken idea can be confused with accuracy.

She simply did not like that he stood for the unchanging faith handed down from the Apostles; the faith which actually paved the way to true progress. She tried to claim the moniker "progressive" to describe her dissent from the teaching of the Church and set up her claim that she was a "progressive" Catholic" and that all "progressive" Catholics would be unhappy with the leadership of Pope Benedict XVI.

She began her article by making a statement and asking a question:. Can you be one during the reign of Benedict XVI? I wrote a responsive article and disagreed with the statement. I insisted that the phrase "progressive" Catholic is not an oxymoron. Then, I answered her question with an enthusiastic "Yes".

I argued that one could be a truly "progressive" Catholic under the dynamic and forward facing leadership of Pope Benedict XVI. Let's begin by simply examining the word "progressive" with reference to the dictionary.


It defines "progressive" as an adjective, meaning "Moving forward; advancing. Of course, in making this claim, I totally rejected Ms. Vennocchi's definition of the phrase "progressive" Catholic. That is because I disagreed with her over a more fundamental question, the nature of true progress. Let's consider the artful and strategic misuse of words, then the historic evidence of true progress brought about by the influence of the Christian Church.

Both lead to the same conclusion, Faithful Catholics, and other Christians, are the true "progressives" of our age.

We have lived through the use of word games too many times in the last few decades. For example, I, as a faithful Catholic Christian, have been very actively involved in promoting legal recognition of the inalienable right to life at every age and stage for decades. I have sought to inform my political and social participation by the values derived from my faith.

I simply try to live a unity of life. I am pro-life, pro-family, pro-freedom and pro-poor. I oppose the killing of innocent children in the womb, which is always and everywhere wrong because it is the taking of innocent life. I oppose euthanasia, period, no matter how it is disguised. It is never compassionate to kill someone. These strong positions have often led to efforts to label me "conservative", and, in some instances, to marginalize me further by connecting me with the "religious right.

However, I also oppose Capital Punishment. It is no longer justifiable because bloodless means are available to punish the malefactor, to defend society and to serve the common good. Therefore mercy should trump justice. That is not, to some, a "conservative" position. I opposed the initial foray into Iraq as morally wrong, unable to be justified under any effort at applying the "Just War" Theory. Now, I am deeply concerned for what could occur in the aftermath of a precipitous withdrawal and am evaluating the best prudential path toward peace.

I have long been deeply concerned about - and written extensively concerning - our obligations in solidarity to the poor, calling for economic reform including a family wage. I believe that the market economy must always first be at the service of the person, the family and the common good. In these matters, even some who agreed with my unqualifiedly pro-life bona fides, began to insist that I sounded "liberal" or used the term "left" in reference to some of my articles concerning these subjects.

I have regularly called for moving beyond "liberal" and "conservative", insisting that faithful Catholics who understand, believe in and seek to apply the full palate of Catholic Social teaching, in order to effect genuine social justice, are not "left" or "right", "liberal" or "conservative", in the political sense of those limiting words. They are simply being faithful Catholics. The same kind of political terms have been mistakenly applied in the realm of theological fidelity to the Magisterium of our Catholic Church.

Those who believe that the teaching office is a gift from God; who embrace the full teaching of the Catholic Church and believe that it should be followed by Catholics, are regularly called "right wing" or "conservative", or, even "traditional".

I have also rejected all of these labels. I have long insisted that "Catholic" is the noun. To be a Catholic is to accept the fullness of the Christian faith as handed down to us from the Apostles and to follow the teaching office of the Church which is a gift from the Holy Spirit. If anything, the more accurate question to be posed in examining how an individual professing Catholic approaches living his or her Baptismal obligation is whether they are being faithful or unfaithful. What the Catholic Church teaches on matter of doctrine, faith and morals is clear, consistent, cut from a whole cloth, can be known and must be followed by Catholics.

It is a matter of truth in labeling. That is because what the Church teaches has been handed down by the Lord and passed on through the "Tradition", with a capital "T". I am called to embrace it with a full assent of intellect and will. I also try to live it, to the best of my ability. I am a Catholic Christian by continuing personal choice. My faith is the source of deep fulfillment in my life. Yet, I do not use the term "traditionalist" to describe my faith. I believe it too has been co-opted at times.

I value the faithful "traditionalists" who are in full communion with the Catholic Church and believe they are a gift. However, the term "traditionalist" has sometimes been stolen by some in schism, such as integrists and sedevacantists. Finally, there is another objection I have to using the term. It sounds as though one wants to go backward to some other time in history. I love the Second Vatican Council, rightly understood, correctly taught, properly and faithfully applied.

Pope Benedict's commitment to continuity is a beacon of light at a time of confusion and darkness. He shines the light of the true faith on the way of the Third Christian Millennium. Just as it did in the first and the second millennium, it illuminates the way of all true progress.


Though I do not like most adjectival descriptors, if I had to use some to describe myself I would say that I am a dynamically orthodox, Magisterium following, Catholic Christian. To be dynamically orthodox is to recognize the progress the Church makes as she journeys through time to eternity. She is not static. In fact she is the agent of real change, real progress and always calls persons, cultures and Nations to conversion. Under the inspiration of the Holy Spirit, she proclaims ageless truths in fresh and new ways, calling all men and women forward and toward progress.

The "Tradition" of the Church is very different than "traditions" of men and women. It is a gift of the Holy Spirit. It guides us forward to the future. Christianity proclaims a linear view of history. There is a timeline to history; it has a beginning and an end, a fulfillment, which is, in fact, a new beginning. Time is heading somewhere. That is true of the history of the world, the Church and our own personal histories. 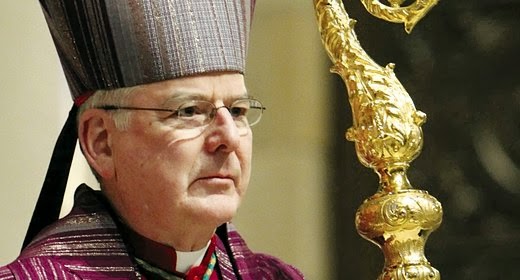 We are always progressing toward His loving return. In that sense, following the Tradition is about following the path to the future, while standing on the shoulders of the giants of the past.